History of the Memorial

You are here: Home / History of the Memorial

The project to build a memorial in Fountain Hills actually began in 1999 when, at the request of group of veterans, the town set aside an area next to the lake in Fountain Park for a future veterans’ memorial. The project actually didn’t get off the ground until about 2001 when the right mix of town officials, veterans and contractors came together to actually begin the planning and construction processes. The catalyst for this cooperative effort was the destruction of the World Trade Center on September 11, 2001. At the time the land was set aside, the memorial was envisioned as simply a cannon surrounded by a bed of roses.   The final product is much more elaborate than the original idea. The efforts of these dedicated citizens and veteran’s has resulted in a magnificent 10,000 square foot facility.

Of all the people who worked tirelessly on the project from design to completion there are two men worthy of special mention. Without them the project would never have become a reality.  Neither of these individuals are veterans, but they contributed their talents because they were inspired by their fathers who were WWII veterans.  These two people are Ross Bern, the architect who designed this world class memorial, and Mike Archambault, the general contractor, who supervised the construction phase.

The effort to build the memorial began with the formation of a non-profit 501(c)3 corporation named the Fountain Hills Veterans Memorial, Inc. This was done to aid in the fund raising effort and to provide a mechanism for managing funds to maintain the memorial after its completion. The memorial is truly the result of a grassroots effort.  The veterans’ fund raising efforts raised $75,000 in three years, $40,000 was donated by the town of Fountain Hills, $80,600 was donated by the citizens of Fountain Hills, $43,000 from the Ft McDowell Yavapai Nation and in excess of $250,000 was donated in labor and material by many contractors

The construction began with installation of the flag poles at the west end of the plaza. This was completed in April of 2003. The construction of the cannon pad was the next step in the process. The concrete for the cannon pad was donated by the Ft McDowell Yavapai Nation. There was a lull in the construction for a time while fund raising consumed most of the efforts of the memorial committee.   A cannon was located in Alabama and arrangements were made through Swift Trucking to transport and deliver it to the Phoenix National Guard facility. The National Guard refurbished the unit and painted it 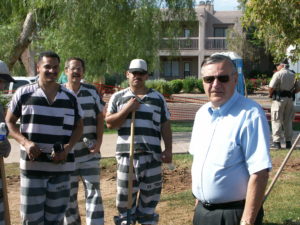 Sheriff Joe and the Chain Gang

before delivering it to the memorial plaza. It was a special day when the cannon was finally rolled out onto the pad and bolted into place.

After some additional fundraising, the final construction phase began. It involved three elements. One was the actual building of the walls and other features, and the second was the design and casting of the bronze plaques that were to be installed in the west wall and the third was designing the donor recognition plaques.

The veterans working on this project contributed an unknown number of hours and dollars to make their dream come true. They dug trenches, poured concrete, and painted walls, and risked life and limb when one of the walls collapsed while it was being grouted. There was even help from Sheriff Joe Arpaio’s chain gang. They cleaned and shaped the trenches that were dug for the footings.

The dedication of the memorial took place on Memorial Day in 2005. The ceremony was attended by over a thousand people. The speakers and attendees included Congressman J.D. Hayworth, Sheriff Joe Arpaio, State Senator Caroline S. Allen, Medal of Honor recipient Fred Ferguson, and Navajo Code Talkers Joe Kellwood, who sang the Marine Hymn in Navajo and Art Hubbard. Shown at right are Fred Ferguson and Joe Kellwood. 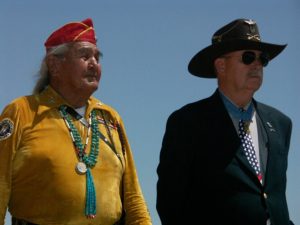 The memorial consists of four distinct areas, the long curved wall, the cannon area, the donor wall, and the plaza.  On the west end of the memorial there is a curved wall which measures 110 feet long by 12 feet high.  This wall is adorned with six plaques remembering the veterans of the six wars depicted.  The plaques honor veterans from the Spanish American War, WWI, WWII, Korea, Vietnam and the Persian Gulf.  The Spanish American War was chosen as the starting point because the veterans of that war banded together in an attempt to improve their post war benefits.  The result of those efforts was the founding of the Veterans of Foreign Wars in 1911.

The plaques were sculpted by a local Scottsdale sculptor, Mr. Ron Head.  Ron’s job was to create a 3 dimensional bronze plaque which was artistically balanced and pleasing to the eye. The content of each plaque was based on the input from the Veterans Memorial Committee. The Memorial Committee’s job was to choose four to six unique things that would readily identify the relevant war era to the viewer without having the viewer read the script under the scene.  The veterans who designed these magnificent 250 pound plaques believe that they are some of the finest bronze historical markers anywhere in the country. The area to the right of the six plaques was constructed to easily accept two more plaques.  The space to the immediate right is reserved for a plaque remembering the Afghanistan and Iraq veterans who are fighting the global war on terrorism.  As for the last space, the veterans pray that it will forever remain vacant. On the east side of the memorial is a howitzer that sits on a pad that is 26 feet in diameter and contains approximately 75 cu yds. of concrete. The entire memorial has over 270 cu yds. of concrete, with about 3 miles of rebar embedded in the concrete.  The cannon itself is a 1940’s vintage towed 155MM howitzer which took a crew of 11 to operate.  It weighs just over 12,000 pounds and has the capability of shooting a 100 pound projectile over 9 miles with great accuracy.   This particular gun was probably used in WWII, Korea and Vietnam.  Mounted on the pylons surrounding the cannon pad are the bronze shields of the 5 Armed Services, Army, Marine Corp, Navy, Air Force and US Coast Guard.  The pylons are also wired to accept speakers which at some point in the future will offer a visitor to the memorial a history lesson at the push of a button.

The green wall adjacent to the cannon pad is the veterans’ memorial or entry wall.  It measures 49 ft 4 in long, 14 ft high and 2 ft wide.  To the left of the passage way, facing east is a copper plaque of Bob Hope depicting him as most veterans remember him, on stage, entertaining the troops.  The plaque was drawn by our local cowboy artist, Carlos Hadaway, a Vietnam Veteran, who donated it to the memorial.  Mr. Hope, as you may know, is the only non-veteran given veteran status by the US Congress for his efforts entertaining the troops for over half a century.  His plaque hangs in our memorial with the special permission of the Bob Hope family. On the reverse side of the wall is a plaque commemorating the USS Arizona, a ship that was lost when Pearl Harbor was attacked in 1941. This plaque was also drawn and donated by Carlos Hadaway.

To the right of the passage way are the donor plaques that identify the donor’s to the memorial, or those the donor wished to remember, in 3 separate categories, Benefactor, Sponsor or Friend.  The donor plaque area is dynamic in nature in that there is the capability to add names for years to come for those who want to donate or remember their loved ones.

On the east side of the entry wall are the seals of the Veterans of Foreign Wars and the American Legion.  The Memorial Dedication Plaque, which lists the names all the veterans who served on the construction committee over the years, is also affixed to that wall.

A short time after completion of the memorial, the veterans who maintain the area thought that something was missing in the plaza. Ron Head, the sculptor of the war scene plaques, was contacted to design a bronze statue that would complete the plaza area. The World War I soldier standing in the east end of the plaza was the result of that effort. The Fountain Hills Museum had a WWI uniform that was almost complete. Because the uniform was so small, it was difficult to get someone wear it. Paul Dahlman, of the American Legion, was selected to model the uniform. The bronze soldier is shown wearing the Medal of Honor and saluting the American Flag.